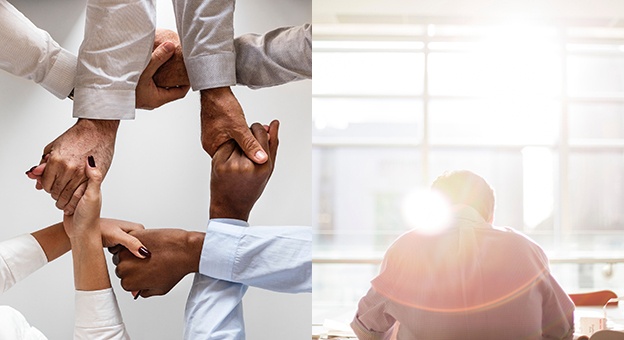 Community and privacy – two concepts that have important implications on happiness, productivity, and general well-being, both in and out of the workplace. So, what role do they play specifically in the workplace and how can you sufficiently ensure both, somewhat opposing needs are being met at the same time? Do you sacrifice privacy if you focus on community? Or, conversely, do you sacrifice community if you focus on privacy?


Value of Community at Work

Being included in a larger social group is one our most basic needs with only the need for nourishment and physical security being ranked higher on the hierarchy of needs. Considering that many spend 40+ hours at work each week, it’s no surprise that community and social inclusion at work are important for one’s mental well-being. And that well-being translates to benefits in the workplace, including increased happiness, reduction in stress, and increased engagement and loyalty.

The benefits also go well beyond individual well-being and into increased productivity - both on an individual and group level. Community is a nuanced concept, but generally, it is a group of individuals united by common interests, beliefs, and/or goals. Working in small, related groups towards a shared goal is essentially, therefore, creating micro communities that include social benefits as well as productivity benefits. By working together in such a way, you benefit from ‘collective intelligence,’ which is “a form of distributed intelligence that arises from the social interaction of individuals and that predicts, more so than the intelligence of individual members, a group’s general ability to perform a wide variety of tasks” (Bernstein and Turban). Basically, it’s a fancy way of saying that the whole is stronger than the sum of its parts, so in the context of work, a team working together as a connected community with aligned goals will generally be more productive than individuals working alone.

If you are a small team or even a team of one, you can still attain the social benefits of community at work by supplementing your situation in some way. For example, you can join a networking/social group for other business professionals like Network After Work or you can work out of a coworking or shared office space that includes an already established community. While your work community will not include other people working towards the exact same business goals, you will be included in a community of people united in their desire to remain connected and to finding new resources and opportunities to grow their businesses further.

Privacy in the workplace is a complex, multi-faceted issue. On the one hand, it has been found that people behave differently and even often try harder when they know they are being observed - a phenomenon called the Hawthorne Effect aka observer effect. And on the other hand, there are certain types of work or thought processing that typically require a distraction-free environment since even a disruption of 3 seconds can break your train of thought and lead to a 25-40 minute delay in getting mentally back to the same place you were prior to the disruption (Haynes, Suckley, and Nunnington). And that’s all not to mention the industries or professions that include strict privacy requirements by law (ex: medical, HR, legal).

So, is privacy at work important? Yes. In fact, beyond the importance of being able to engage in distraction-free thinking and processing, a 2018 study on the impact of open workspaces on human collaboration found a strong correlation between open work environments and a sharp decrease (of about 70%) in face to face interactions (Bernstein and Turban). The study showed that rather than coming together and interacting more in an open, wall-free environment, people instead created their own privacy via headphones, suffered from overstimulation, and increased digital communications with colleagues by 20% – 50% in order to avoid having conversations where they could be easily overheard by others. All this and more combined to a downturn in productivity as measured by the company itself.

As witnessed in this study, potential benefits of the Hawthorne Effect simply are not present when everyone lacks privacy since it has been theorized that the effect really is more about people feeling special and singled out and an open work environment by definition singles no one out. So, even the potential upside of no privacy is questionable at best.

So what’s the answer to ensuring both community and privacy at work? While there are no one-size-fits-all solutions, studies indicate it is through physical layout and features and worker proximity that you can create both. The key is to choose a workspace or design one that includes both private and communal areas. This variety in available work areas means that people can choose where they work based on what task they happen to be working on. People can lock themselves away for privacy and uninterrupted deep thought or work in a common area alongside coworkers to benefit from the social interactions and collective intelligence.

Are you a solopreneur or part of a small team wanting to extend your community? Another great option combine community and privacy at work is via membership in a shared office environment. All Work Better locations include private offices and communal areas and becoming a member means becoming a part of a larger community.