Located right next door to Work Better’s Grand Central West location is one of NYC’s historic landmarks, the Algonquin Hotel, which is home to the Round Table Restaurant and Blue Bar.

Opened in 1902, the hotel became a New York City Landmark in 1987 and a National Literary Landmark in 1996. It received this prestigious designations due to its history of hosting several famous authors, actors, and journalists almost daily from 1919 to 1929 at the Algonquin Round Table. During these daily luncheons, the various full-time members and occasional guests would play games and tell jokes with some of it ending up in their respective newspaper columns, which is how the self-titled ‘Vicious Circle’ gained national notoriety. 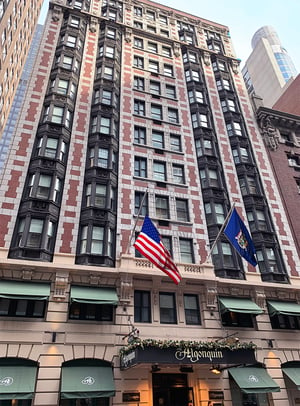 Today, the hotel is popular for more than just its incredible literary history. The hotel also shows up on several of the most haunted hotel lists because of reports of hearing footsteps and moving furniture and of seeing the former Round Table members roaming around.

Take the hotel’s history, haunted status, and throw in the Algonquin Cat, and you have a great historic dining and happy hour option in Midtown NYC. You can grab lunch in the same dining room as the famous Algonquin Round Table or have a cocktail in The Blue Bar under the soft blue light. They even have a $10,000 martini if you’re feeling especially indulgent. 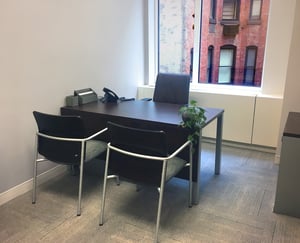 And if you can’t get enough of what this New York landmark has to offer, several of the private offices like the one pictured here at our Grand Central West location feature incredible views of the hotel. Don’t worry - there have been no reports of visits from the hotel’s ghostly residents...yet.

Features: Steps from Grand Central Station with 75 bottled beers and 25 beers on tap

Special thanks to the members of our incredible Grand Central West team, Heath Blain, Karla Calle, and Maricelis Rodriguez, for their contribution.